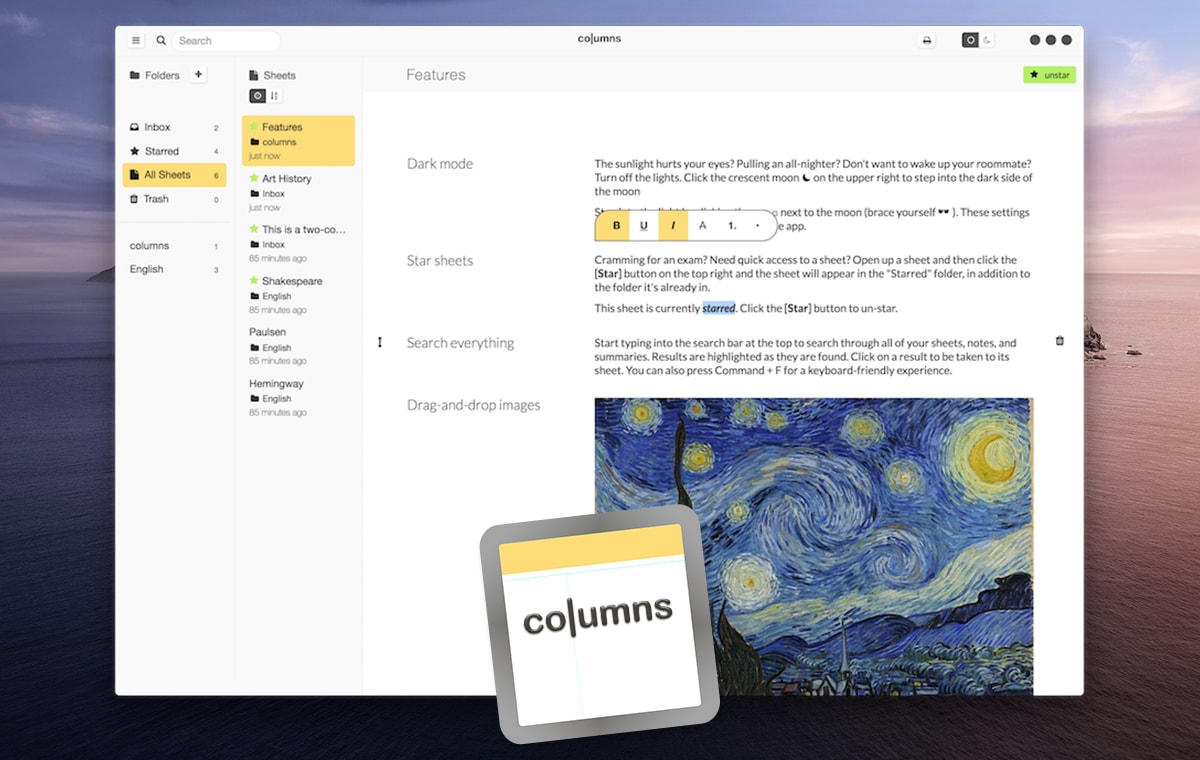 No more forcing a word processor to do what it wasn’t designed to do. Take Cornell notes, complete with title, cue column, detail column, and summary. Use custom text formatting to give your notes structure and make the important points stand out. Edit and rearrange your notes as you go. Organize your sheets into folders so you can take notes for all of your classes or for different projects. Use the Cosmic Search bar to search through all your sheets, notes, and summaries. Results are filtered and highlighted in real-time as you type. Star sheets so you can get to them fast. And when you’re done, export to your printer or to PDF. 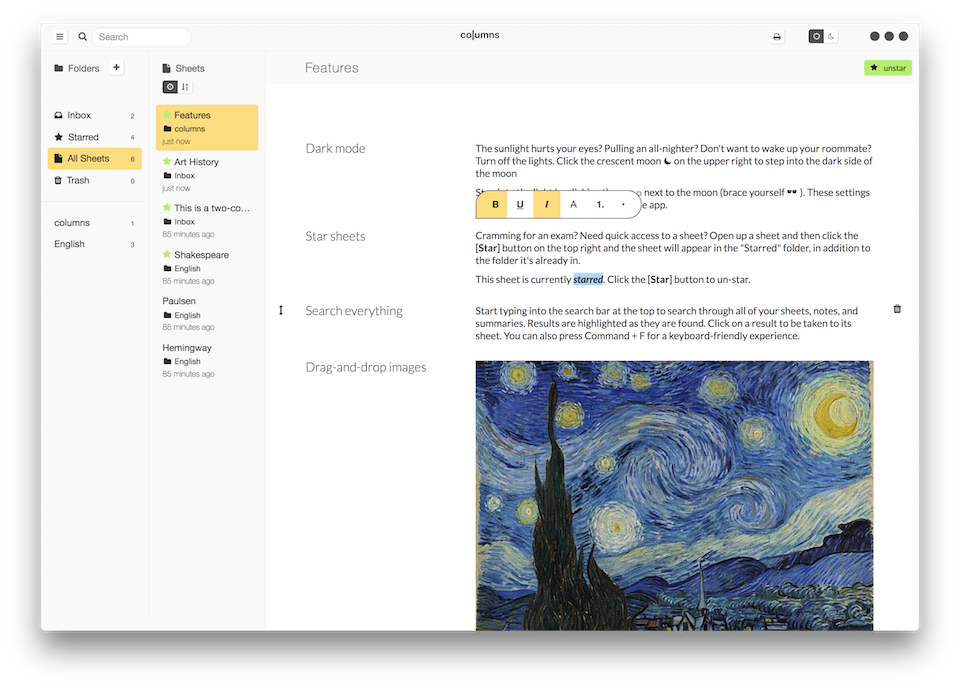 Without taking notes, only 10% of what you hear may last in memory. With good note-taking, that number can go up to over 80% 📈. Despite the benefits of note-taking, 1 out of every 3 students do not take notes 🙋🏼‍♀️ 🙋🏼‍♀️ 🤦🏼‍♀️.

Cornell note-taking is one of the most frequently recommended note-taking formats by universities and high schools. It helps you take useful notes in an efficient way, allowing the notes to be used for review and self-quizzing. 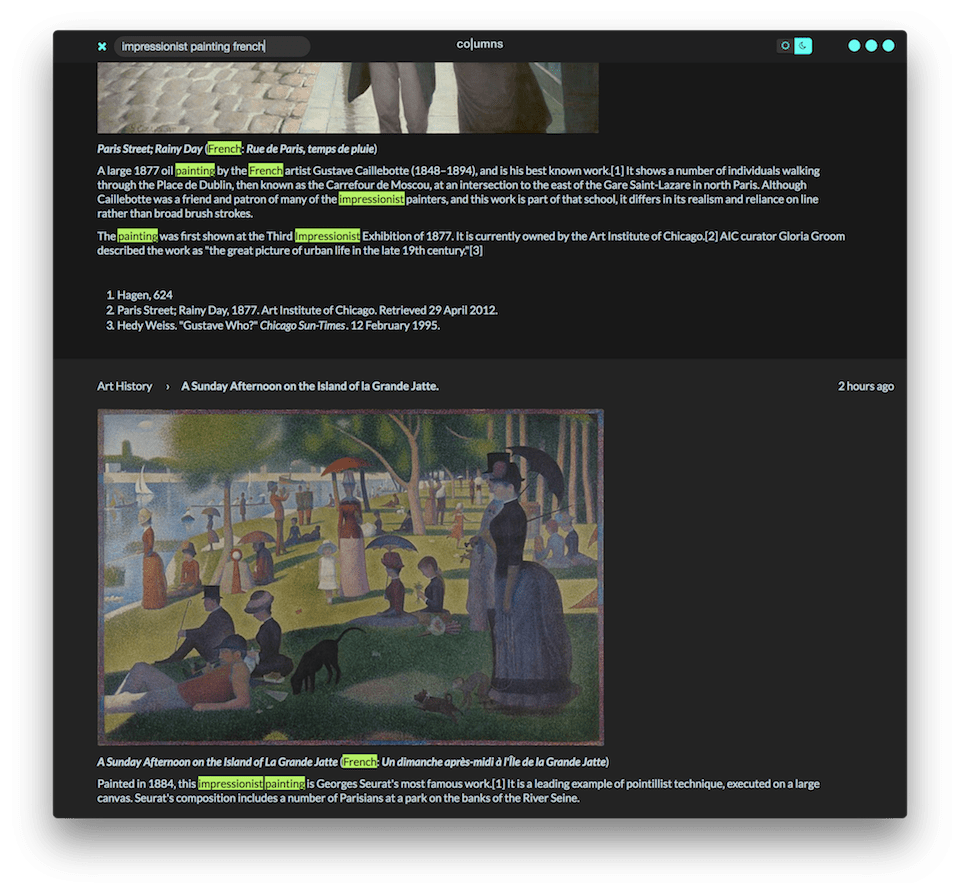 Search all your Notes Quickly 🔍

Use the Cosmic Search to search through all your sheets, notes, and summaries in any folder. Results highlighted and filtered in real-time as you type. Click on a search result to be taken to its sheet. 🧙🏾‍♂️

Implement your own tagging system just by using text and search. If you’ve written it, you can find it. Search supports international text characters. 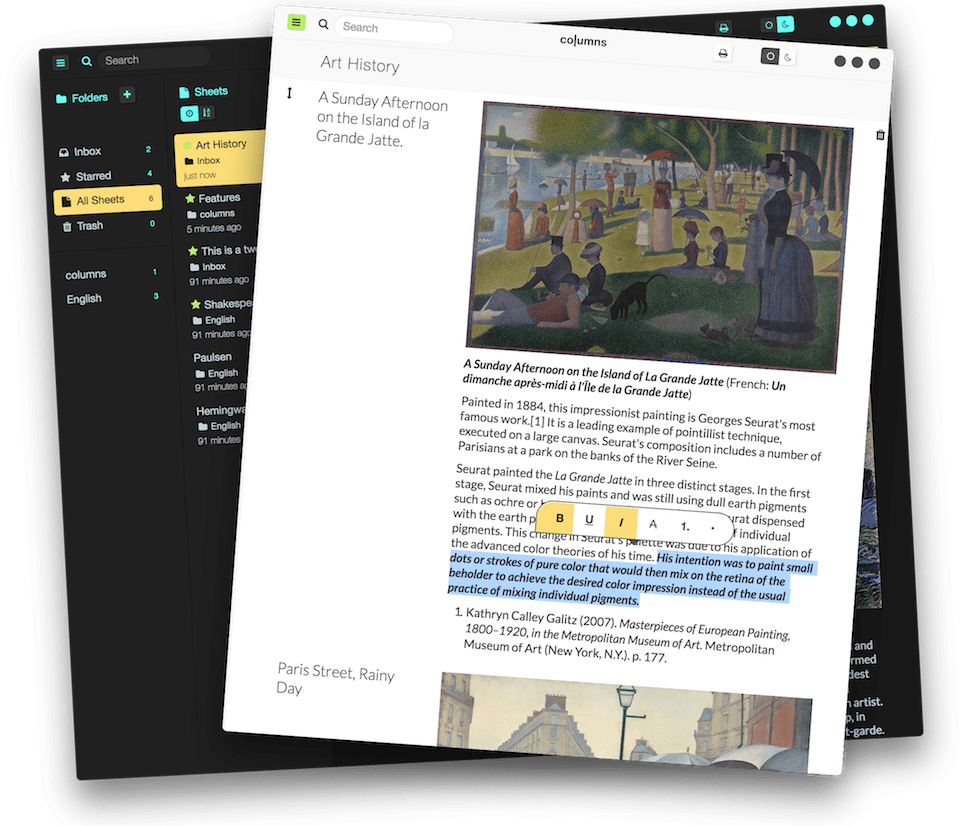 Light or Dark. Fullscreen or to the side 🎚

The sunlight hurts your eyes? Pulling an all-nighter? Don't want to wake up your roommate? Turn off the lights. Click the crescent moon ☾ on the upper right to step into the dark side

Step into the light by clicking the sun ☼ next to the moon (brace yourself 🕶). These settings will be remembered when you close the app. 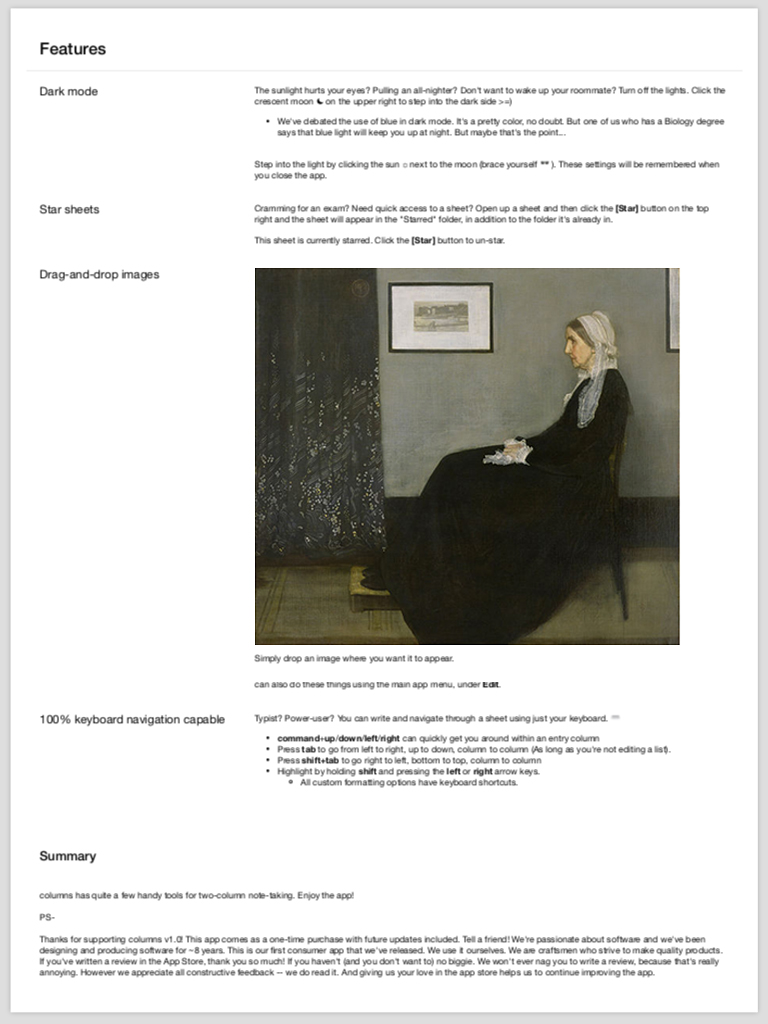 At any time, you can print your notes 🖨 or export them as PDF to share with others or review outside of the app such as in Preview, or on another device such as an iPad®  📄

Exported sheets are full-spec two-column Cornell notes, including the title, notes, and summary, and can be multiple pages. 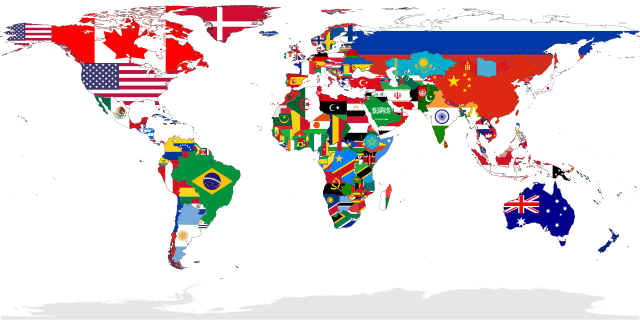 One of the well-researched use cases for Cornell note-taking is its effectiveness in improving language skills and its components. [1]

Retain more of what you study

No more forcing a word processor to do what it wasn’t designed to do, or drawing lines on paper.

During a meeting, while listening to a lecture, watching a film, or reading a book.

Notes are a work in progress. Go back and edit.

If you’ve written it in Columns, you can quickly find it using the Cosmic Search bar.

Navigate through a sheet, write, and apply formatting using just your keyboard.

"Student achievement scores on the tests using the Cornell Note Taking Strategy (CNTS) increased substantially. Student test scores improved an average of 24.5% in U.S. History and 20.4% in Lanuage Arts when students used the CNTS. The use of such a simple tool to assist students in preparation and organization of notes for tests along with aiding in setting up a study plan can be beneficial to students. Students can reduce the amount of time preparing for exams as well as other assignments by using the organized system of the Cornell Notes."

"The results of data analysis revealed that students who learnt composition by using the suggested Cornell method performed considerably better than did students who learnt through conventional method. The result of the current study agreed with the previous related studies (Jacobs, 2008; Zorn 2017; Baharev ,2016; Davoudi, Moattarian & Zareian, 2015; Rahmani & Sadeghi, 2011 &Hayati, 2009) which showed positive effects of using Cornell method on improving language skills and its components."

Although Columns seeks to provide a faithful Cornell Note-Taking experience on a computer device, visitors of this website should not misconstrue any of the abstracts and conclusions cited from publicly available research papers as direct endorsements for Columns.

Mac, macOS, and iPad are trademarks of Apple Inc., registered in the U.S. and other countries.